Alexander III of Macedon, also known as Alexander the Great. The ruler of the ancient Greek Kingdom of Macedonia and a representative of the famous Argead dynasty. Born in Pella in 356 BC. At the age of 20, he succeeded his father, Philip II. His rule was almost entirely dominated by military conquests. By the age of thirty, Alexander had created one of the largest empires of the ancient world, which stretched from Greece to the Northwest of India. He was never defeated in battle, which made him the greatest General of all time.

Alexander's Conquests influenced world culture, creating bizarre mixes like Greco-Buddhism. He named more than twenty cities in his honor, including the famous Egyptian Alexandria. Alexander's campaigns contributed to the spread of Greek culture in the East, which became the basis of Hellenism, which influenced the Byzantine Empire in the mid-15th century BC and partially persisted in Central and Eastern Anatolia until the 1920s.

Alexander the Great is a legendary figure, a descendant of Achilles, who worshipped him all his life. His military conquests became the subject of study and admiration of many military leaders. His tactics are still studied in military academies. Along with his teacher, Aristotle, Alexander is still considered one of the most influential people in world history.

Skills of Alexander the Great:

Active skill-King's Shield
Need rage: 1000
Alexander the Great is protected by a powerful shield for 4 seconds. At the same time, Alexander protects the second small shield of the allied army next to him, which has the smallest percentage of troops left for 2 seconds. (a smaller shield can be passed to Alexander's own troops if they have reached the lowest number).

Hero Aexander the Great raises a shield, similar to the shield of Karl Martell, but the difference is that instead of damage from the shield (as in Martell), Alexander raises an additional second shield. How does it work? A small shield (optional) is raised for the unit with the least number of troops, and this unit can be any other unit of yours, as well as any unit of your ally, and this unit can be Alexander's unit. If on the field any team in the vicinity of sagging and has the least troops, the commander will raise an additional shield for 600 points of damage for this team. Everything is good here, everything is simple, the skill is excellent.

Passive skill-Ahead of everyone
When Alexander's troops are on the map, they are not affected by any damage-reducing effects. Moreover, all normal attacks have a 10% chance to deal more damage to the target and reduce the target's healing effects by 5 seconds.

As we know, the active skills of commanders are the main skills, but in this case, and I think it's obvious that the hero Alexander the Great in the game Rise of Kingdoms, the main skill is this second skill. The skill has a huge amount of damage, and this is an infantry commander who has a lot of stamina-especially in conjunction with other infantry commanders, but now thanks to this commander, an infantry squad can deal a huge amount of damage. In addition, there is a chance to reduce the healing effects by 30% for 5 seconds, so Alexander can partially successfully fight with a commander like Richard or Friedrich and other commanders with massive treatment and destroy them more easily. Therefore, we pump it to 5 and point. But! Even at the first level of leveling, the skill Ahead of everyone is able to "immunity" from reduction to damage, so commander Alexander the Great has done a lot and will do a lot. Which is also nice.

Passive skill - commander on the front line
Increases the speed of the infantry unit on the March and attack the infantry while the troops are on the map.

the Skill is simple and awesome, given that the infantry deals 30% more damage due to the attack — this is a lot, the infantry has never been able to do so much damage. Infantry in Rise of Kingdoms has the potential to run faster thanks to a +30% March speed bonus. You will not be able to catch up with the cavalry because they will run through the beds and there is a branch of mobility, but now it will be more difficult to escape from such infantry. The skill unlocks the potential of the infantry as an attacking unit, not just as a defensive unit to absorb damage.

Reinforced:king's Shield-Expert skill Son of Amon
Immediately raises a shield that can absorb high damage (1200 damage multiplier, for 4 seconds). At the same time, Alexander uses a second small shield to protect the allied army nearby that has the lowest percentage of troops left (600 damage multiplier, for 2 seconds), and also increases the damage received by nearby enemies (up to 3 targets) by 30% for 4 seconds.

Very strong expert skill. With this skill, the unit imposes a debuff in the radius around it. Opponents who fall under the debuff will receive more damage for 4 seconds. Expert skill contributes to mass fights. Here you can immediately see the benefits of using this commander. You should always have Alexander the Great. The commander is strong. an infantry Commander with excellent defense and resistance, ideal for long battles.
His active skill absorbs a large amount of damage from our enemies, strong defense.
Its flawless defense is very effective in any form it uses (garrison (secondary) or open field).
Alexander - commander of the offensive infantry.< br>Alexander makes good use of his units and improves them on the battlefield, he even has a high recovery rate of healing for any commander who uses this type of skill. 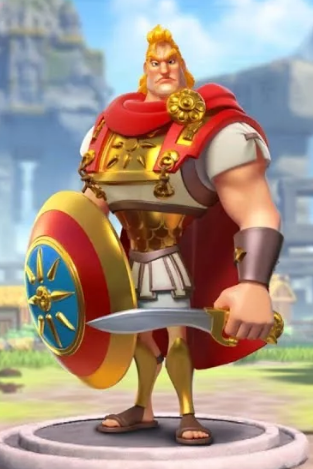